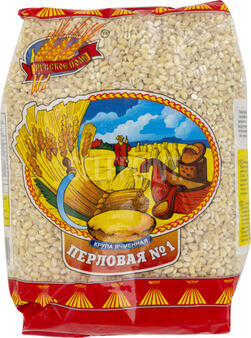 SKU 4603833000726
$2.99
If You Choose UPS Ground Service at checkout (if available), you are responsible for condition of your order and UPS delays.
In stock
1
Product Details

Among cereal crops, barley is one of the oldest cultivated grains in the world. It thrives in temperate zones, and is relatively easy to grow. Barley and its products have been eaten by humans all over the world for thousands of years, in dishes ranging from bread to nutritious porridge. Like many other grains, barley is a grass which produces a cluster of roundish grains in the fall. These grains are harvested and processed into an assortment of products.

Barley groats are the hulled seeds of the barley plant. Like other grains which retain bran, endosperm, and germ, barley groats are considered to be a whole grain. Whole grains are highly nutritious and especially high in fiber, making them popular in the diets of people who are concerned about their health.

Groats are used in things like soups, pilaf, and stuffing. Among cereal crops, barley is one of the oldest cultivated grains in the world. It thrives in temperate zones, and is relatively easy to grow.

A very high fiber content, vitamins and minerals, antioxidants, heart health and diabetes protection are just some of the barley nutrition benefits that make it one of the best whole grain choices.

WEEKLY DELIVERY AVAILABLE TO COUNTIES SURROUNDING RICHMOND.  Just enter your address at check-out to see if you qualify.  If you don't, just contact us and we will try to make you happy!!! You can shop in our store or shop online and schedule pick up time.  Moreover, we ship via UPS!!!  Please note that perishable products, including chocolate, is shipped only overnight.