UNIQUE LOCAL NEXT DAY DELIVERY (based on address at checkout) 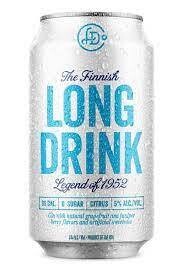 The Long Drink: a refreshing citrus soda with a premium liquor kick.

Unlike the seltzers made with fermented sugar, Long Drink is a true award-winning liquor that is smooth, refreshing and doesn't leave you with that full beer feeling.
Long Drink Zero is the same great taste but with zero sugar and zero carbs. Only 99 calories but still with 5.0% alc./vol.

Long drink is a top selling category of alcohol in Finland - a legendary taste that is now available in America.

The roots of long drinks go back to the 1952 Summer Games in Finland, when the country of only 4 million people was still recovering from World War II. Concerned with how to serve drinks quickly enough to all the visitors, the government commissioned the creation of a revolutionary new liquor drink, and so the first long drinks were born.

Now this legendary taste has finally been brought to America by the next generation of Finns who want the world to experience the refreshing and unique Finnish Long Drink.

Only a few weeks after the Long Drink was launched in the US, actor Miles Teller happened to be in New York City for the weekend. Hanging out in his old LES neighborhood, he stopped by a local store where there was a Long Drink tasting event conducted by the Finnish founders.

He loved it so much that he started getting it shipped to his place in the West Coast, and Miles kept in touch with the finnish founders. That led to Miles becoming part of The Long Drink family Miles Teller, asked his longtime pal Kygo to DJ his wedding. There, Kygo tried The Long Drink for the first time. He loved the taste and felt so passionate about the drink that he wanted to be a part of the family too.

Kygo then introduced golfer Rickie Fowler to the drink, and he also wanted to join the movement.

Miles, Kygo and Rickie will be actively involved in bringing the legendary story of the Finnish legend across the USA

NEXT DAY LOCAL DELIVERY AVAILABLE.  Just enter your address at check-out to see if you qualify.  If you don't, just contact us and we will try to make you happy!!! You can shop in our store or shop online and schedule pick up time.  Moreover, we ship via UPS!!!  Most residents of Virginia, Delaware, Maryland, North Carolina, and Washington DC can receive their products overnight WITHOUT overnight fees!!!